Earlier this month, Tony Woods, Creative director at Garden Club London and our dedicated team of craftsmen started the build of the garden for the Finals of the Royal Horticultural Society ‘Young Garden Designer of the Year’ competition. We are delighted to announce that not only did Tony win the well deserved title of ‘Young Garden designer of the year’ but also a very well respected RHS Gold medal. The garden was very well received by the BBC 2 film crews, national press and of course the RHS Judges.

‘Escape to the City’ provides the homeowner with a secluded getaway in the heart of the City’. Tony Woods used lots of shade loving plants and transparent screen plants to create a fusion of modern contemporary garden design with rich planting including grasses and foliage plants. Transparent screens were created from a selection of recycled materials including steel tubes, reclaimed scaffold boards and a reclaimed stone wall feature.

‘Escape to the city’ used reclaimed scaffold boards for the deck and timber screen and western red cedar for the rear fence. Reclaimed steel tubes were used for the upright post screen and cobbles rescued from roadworks in preston formed the path through the garden.

Garden Club London’s team of craftsmen and designer Tony Woods won a gold medal for the quality and design of the garden build and the use of lush and abundant planting.

“An extraodinary sureness of touch, the planting is fulsome and rich” Monty Don BBC 2

Urban garden design for London garden with planting and seating 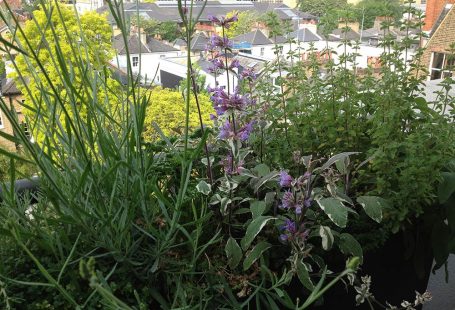 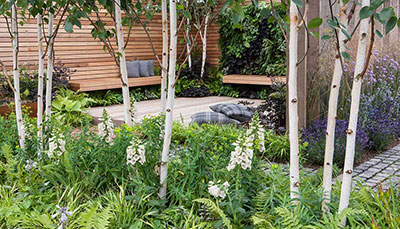 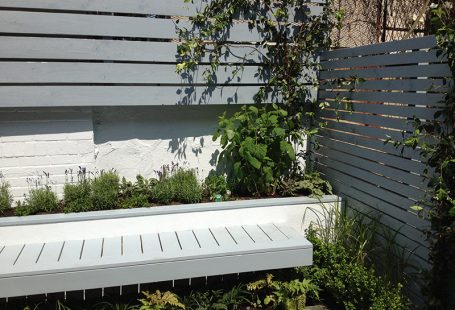